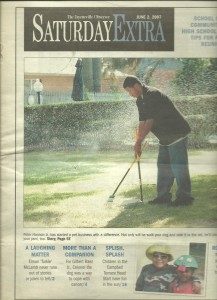 “This is the kind of job I always needed to have,” Hannon said as he scooped dog poop from Carol Johnson’s yard in Cliffdale West last week. “I can’t sit at a desk. I have to be out.” What helps is that Hannon, 22, is working for himself. Two months ago, he launched PetTastics, a business offering services to pet owners that range from dog walking and a taxi service to ridding yards of the smelly waste. He’s building a client roster by distributing fliers at the Dogwood Festival and pet-related events around town. He also contacted all the apartment complexes in the area that take pets. Coming up with the idea wasn’t so difficult. Hannon, a lifelong dog lover and owner of three himself, used the most ancient rule of economics — identify an unmet need and meet it. “It started with the poop,” he said. “Most people aren’t going to want to clean up their own poop.” Hannon knew he wanted to be his own boss. His idea would allow him to work alone and provide a service without a big investment. His research found professional poop scoopers in every large urban area in North Carolina — except Fayetteville. Coming up with a slogan has been tricky though. He had one idea — “PetTastics: We Take The (guess what) Out Of Your Life” — but decided against it, for obvious reasons. After graduating from Hoke County High School, a brief dalliance with college convinced Hannon he was more interested in starting his business career. He worked as a police dispatcher and at a group home owned by his father before drafting a business plan for PetTastics earlier this year. 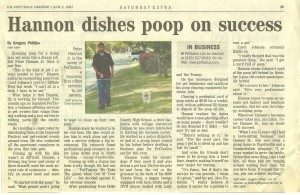 Hannon walks his clients’ dogs if they need it and also drives a pet taxi. He ferries pets to and from the vet or the groomer in the back of his 2006 Toyota Scion, a puppy lounge equipped with toys, treats and a DVD player loaded with Lady and the Tramp. He has insurance designed for pet businesses and sanitizes his poop clearing equipment between jobs. Clearing a residential yard of poop starts at $8.50 for a weekly visit, with an additional $2 charge to dispose of the poop off-site. Hannon realizes his duties would have a nose-pinching effect on many people — there wouldn’t be any demand if it didn’t — but says it’s not so bad. “There’s nothing to it,” he said. “For the most part, the poop I get to is dried up and has lost its smell.” And even his friends don’t seem to be giving him a hard time, despite making himself an easy target for teasing. “It’s funny, but if that’s the service he can provide, I think it’s great,” said his pal, Alex Peterson. “I really believe it makes it easier for a person to own a pet.” Carol Johnson certainly thinks so. “I really thought that was the greatest thing,” she said. “I got a yard full of poop.” Hannon cleans Johnson’s yard of the poop left behind by Heide, her 3-year-old cocker spaniel/poodle hybrid. “He’s so nice to her,” Johnson said. “He’s very professional about it.” Hannon hopes to open an upscale pet bakery and boutique someday. But for now, he’s happy scooping poop. Wherever Hannon’s business career takes him, his father, Peter Hannon Sr., has no doubt he’ll succeed. “When I was 12 years old, I had a lawn-cutting business,” said Hannon Sr., who now owns a group home in Fayetteville and a transportation company. “I always wanted to serve the public. He has that same thing. Like I told him, all these kids are running around wasting their time, but you have focus. If you use that focus, you can achieve anything.” *** In Business . Staff writer Gregory Phillips can be reached at phillipsg@fayobserver.com or 486-3596. 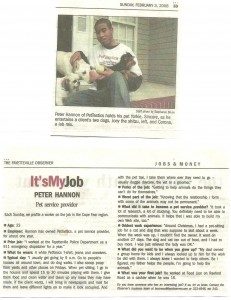 Section: Business Each Sunday, we profile a worker on the job in the Cape Fear region. Age: 23 Employer: Hannon has owned PetTastics, a pet service provider, for about one year. Prior job : “I worked at the Fayetteville Police Department as a 911 emergency dispatcher for a year.” What he wears : A white PetTasics T-shirt, jeans and sneakers. Typical day : “I usually get going by 9 a.m. Go to people’s houses all around town, and do dog walks. I also scoop poop from yards and other places on Fridays. When pet sitting, I go in the houses and spend 15 to 30 minutes playing with them. I give them food and clean water and clean up any mess they may have made. If the client wants, I will bring in newspapers and mail for them and leave different lights on to make it look occupied. And with the pet taxi, I take them where ever they need to go — usually doggie daycare, the vet or a groomer.” Perks of the job : “Getting to help animals do the things they can’t do for themselves.” Worst part of the job : “Knowing that the relationship I form with some of the animals may not be permanent.” What did it take to become a pet service provider? “It took a lot of research, a lot of studying. You definitely need to be able to communicate with animals. It helps that I was able to build my own Web site, too.” Oddest work experience: “Around Christmas, I had a pet-sitting job for a cat and dog that was suppose to last about a week. When the week was up, I couldn’t find the owner. It went on another 27 days. The dog and cat ran out of food, and I had to buy more. I was just relieved the lady was OK.” What did you want to be when you grew up? “My dad owned a group home for kids and I always looked up to him for the work he did with them. I always knew I wanted to help others. So I figured, my father helps the people, I’m going to help the animals.” What was your first job? He worked at Food Lion on Raeford Road as a cashier when he was 16. Do you know someone who has an interesting job? If so, let us know. Contact the Observer’s business team at business@fayobserver.com or 323-4848, ext 343. Staff photo by Stephanie Bruce 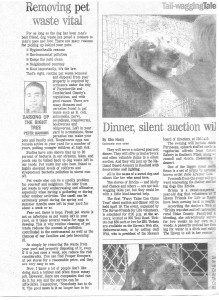 For as long as the dog has been man’s best friend, dog waste has posed a menace to man’s nose and foot. There are many reasons for picking up behind your pets: Hygiene/health reasons Environmental pollution Keeps the yard clean Neighborhood courtesy Most importantly, it’s the law. That’s right, routine pet waste removal and disposal from your property is required by ordinance under the city of Fayetteville and Cumberland County’s regulations, and with good reason. There are many diseases and parasites found in pet waste such as E. coli, salmonella, parvo, coccidiosis, roundworms, hookworms and whipworms. Left in your yard to accumulate, these parasites can make your pets and family sick. Roundworm eggs can remain active in your yard for a number of years, putting younger children at high risk. Studies have also shown that up to 20 percent of bacteria in our streams, lakes, and ponds can be linked back to dog waste left in our yards. Pet waste has also been linked to highly elevated levels of coliform and streptococci bacteria pollution in storm run-off. Pet waste also can be a smelly problem for yourself and neighbors. The odor from pet waste is very embarrassing and offensive, especially when having a gathering or during other outdoor activities. The smell can be extremely potent during the spring and summer months once left in your yard for about a week or so. Fear not, there is hope. Fresh pet waste is not as infectious as pet waste left in your yard, as it takes several weeks for eggs to develop. This is why routine cleaning of pet waste reduces the amount of pollution contributed to the environment as well as the chances of our families and pets becoming ill. So simply by removing the waste from your yard and properly disposing of it, even if it is just once a week, you reduce the risk considerably. You can find Pooper Scoopers at pet stores for a reasonable price, and they are very easy to use. Now, I know a lot of people don’t like doing such a tedious and often times messy job. However, there are companies that can do it for you and the service can be affordable. Remember, “Somebody has to do it. The good news is it no longer has to be you.” Peter Hannon owns PetTastics

Barking Up The Right TreeSection: Saturday Extra Dr. Lauren Meadows By Dr. Lauren Meadows Correspondent Many diseases of old have been greatly eliminated because of a simple invention: the toilet. Well, not necessarily the toilet itself, but the systems designed to transfer waste into a designated area where it does not affect the larger environment. This has greatly reduced potential spread of parasites, infectious diseases and improved the environment. This issue also affects our pets, in that most animals do not use a toilet and require us to clean their environment. Most dogs defecate on their owner’s property. Over time this material will break down and be absorbed into the soil. In the meantime, it can create an environment that harbors parasites (hookworms, roundworms, whipworms) and infectious diseases (parvovirus). Parasites in the environment that were previously shed can and do reinfect pets. Adult animals sometimes won’t show any symptoms of harboring parasites. Besides parasites, parvovirus can be harbored in the soil. Parvovirus is a potentially life-threatening disease mainly affecting puppies. This virus is shed in the stool during infection, but generally does not persist more than 14 days after full recovery. Most animals that survive this infection are not at risk for reinfection. Since toilets don’t exist for dogs, it is a wise idea to clean up your pet’s environment to eliminate the potential spread of parasites and disease. It also looks and smells better too. Be considerate and take a plastic bag with you when going on walks with your pet as well. This will allow you to dispense of any waste in a trash receptacle. Cats also contribute to environmental contamination if allowed outside. Indoor cats typically do have their own toilet in the form of a litter box. Additionally, if a cat doesn’t use its toilet, the mess isn’t typically left around to contaminate the environment. Cats ideally are good about using the litter box. Cats that go outside will often find similar venues to urinate and defecate. These can include a child’s sandbox. For this reason it is strongly encouraged to apply a lid or protective covering over a sandbox because cats can carry parasites in their stool that can infect pets and potentially children. In addition to eliminating pet waste from the environment, you can help by keeping your pets on monthly heartworm preventative that also has efficacy against internal parasites. Heartworms are spread by mosquito bites, so dogs and cats in our area should be on year-round protection regarldess of indoor/outdoor status. What to do with pet waste If not picked up, pet waste may eventually be washed into the street, down the gutter and into the storm drains. Storm drains lead straight to our streams, rivers, and lakes with no filtration. According to Bobby Howard, landfill director for Cumberland County Solid Waste Management office, it’s fine to scoop your pet’s waste, secure it in a plastic bag and dispose of it with your regular trash. Be sure that the bag is properly sealed, since improperly sealed bags can cause health problems. Another option is to flush the pet waste. The water from your toilet goes to a septic system or sewage treatment plant. One local company, PetTastics, will come and scoop your pet’s waste for a fee.. Lauren Meadows, DVM, can be reached at Animal Hospital of Fayetteville, at 323-1535.